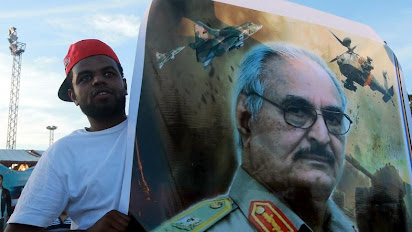 A well known tribal leader who played an influential role in assisting General Khalifa Haftar’s forces to take over oil facilities in Libya’s oil crescent was wounded after a car bomb wounded him in Benghazi, according to officials.

Saleh Al-Ateiwish, leader of Magharba tribe, was leaving a mosque on Friday in Benghazi’s Sidi Frej neighbourhood when a car exploded, injuring Al-Ateiwish and three others, said a security official.

The hospital that Al-Ateiwish was taken to said he was in stable condition.

Al-Ateiwish allegedly convinced the Petroleum Facilities Guard (PFG) to give up their control of major oil facilities in Libya’s oil crescent to Haftar’s forces.

Haftar’s forces said during the week there was rumours going around about a counter attack on the ports.

No group has come forth to claim the attack, however, members of Al-Ateiwish’s family say the attack was an attempted assassination.

In less than a week, Benghazi was hit with two car bombs. The first car bomb took place on Saturday in the city centre killing four individuals, one of which was Muhammad Bugaughis, a pro-Haftar political activist.

Clashes between Haftar’s forces and his opponents in Benghazi have been ongoing for about two years. A statement was released in July by a group opposing Haftar, called the Defend Benghazi Brigade (DBB), accusing the rogue general of destroying civil institutions, abusing women, burning homes and properties, killing religious leaders as well as those who memorized the Quran in eastern Libya. The DBB claim that Haftar has done nothing but destroy and add more chaos, destabilization and lack of security to eastern Libya.