Turkish Embassy to Reopen By the End of the Year 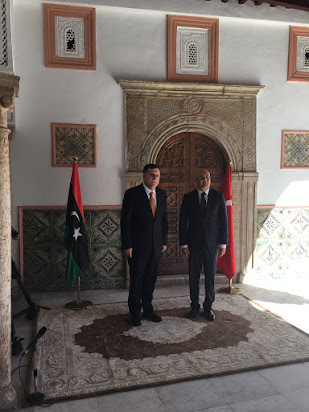 Emrullah Isler, Turkey’s special envoy to Libya A senior said that Turkey would soon reopen its embassy in Tripoli.

At a press briefing in Tripoli, Isler said that the Turkish mission to Tripoli will be taking the appropriate measures to reopen the Turkish embassy. The Ambassador will likely relocate to Tripoli from Tunisia sometime in November or early December.

“We are studying the resumption of Turkish Airlines flights to Libya soon,” he added.

Hobek tweeted on Thursday that “Ambassador Dogan presented his credentials to Libyan Prime Minister Sarraj” at a meeting in Al-Hamra Palace.

Turkey pulled out its diplomats from Tripoli in July of 2014 after Libya’s security fell apart and the violence got out of hand. Following the Libyan uprising in 2011, Libya has struggled to maintain peace and security within its borders.