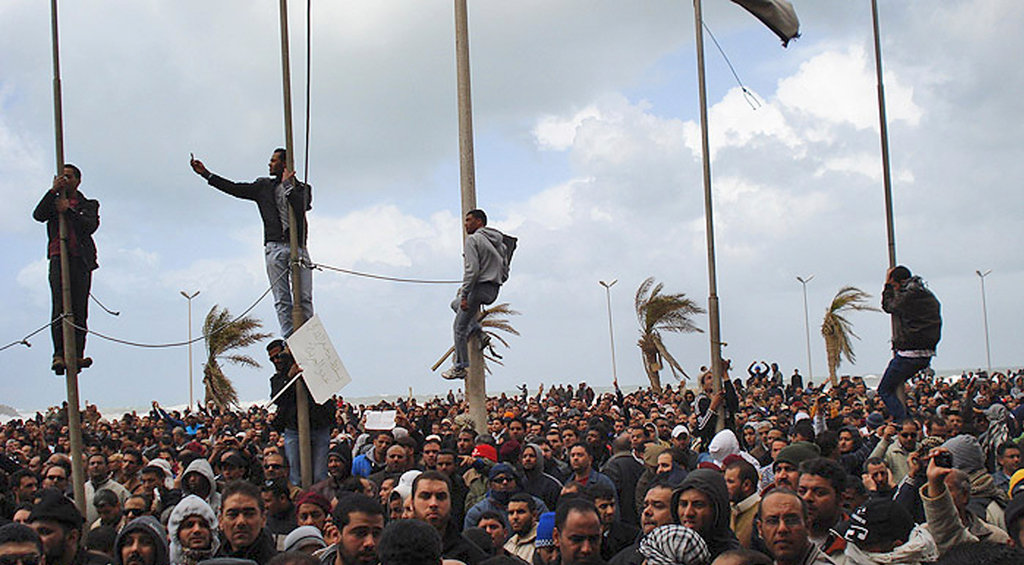 (Republished from the New York Times)

CAIRO — A five-day-old uprising in Libya took control of its second-largest city of Benghazi and spread for the first time to the capital of Tripoli late on Sunday as the heir-apparent son of its strongman, Col. Muammar el-Qaddafi, warned Libyans in a televised speech that their oil-rich country would fall into civil war and even renewed Western “colonization” if they threw off his father’s 40-year-long rule.

In a rambling, disjointed address delivered about 1 a.m. on Monday, the son, Seif al-Islam el-Qaddafi, played down the uprising sweeping the country, which witnesses and rights activists say has left more than 200 people dead and hundreds wounded from gunfire by security forces. He repeated several times that “Libya is not Tunisia or Egypt” — the neighbors to the east and west that both overthrew their veteran autocrats in the space of the last six weeks.

The revolt shaking Libya is the latest and most violent turn in the rebellion across the Arab world that seemed unthinkable just two months ago and now poses the greatest threat in four decades to Colonel Qaddafi’s autocratic power. The United States condemned the Qaddafi government’s lethal use of force.

Witnesses in Tripoli interviewed by telephone on Sunday night said protesters were converging on the capital’s central Green Square and clashing with the heavily armed riot police. Young men armed themselves with chains around their knuckles, steel pipes and machetes. The police had retreated from some neighborhoods, and protesters were seen armed with police batons, helmets and rifles commandeered from riot squads.

The protesters set trash hauling bins on fire, blocking roads in some neighborhoods. In the early evening the sound and smells of gunfire hung over the central city, and by midnight looting had begun.

“The state has disappeared from the streets,” said Mansour Abu Shenaf, a writer living in Tripoli, “and the people, the youth, have practically taken over.”

In Benghazi, the starting point of the revolt, three witnesses said that special military forces called in as reinforcements had instead helped the protesters take over the local army barracks. “The gunshots you hear are the gunshots of celebration,” said Abdel Latif al-Hadi, a 54-year-old Benghazi resident whose five sons were out protesting.

The younger Mr. Qaddafi blamed Islamic radicals and Libyans in exile for the uprising. He offered a vague package of reforms in his televised speech, potentially including a new flag, national anthem and confederate structure. But his main theme was to threaten Libyans with the prospect of civil war over its oil resources that would break up the country, deprive residents of food and education, and even invite a Western takeover.

“Libya is made up of tribes and clans and loyalties,” he said. “There will be civil war.”

Recalling Libya’s colonial past, he warned, “The West and Europe and the United States will not accept the establishment of an Islamic emirate in Libya.”

There was no sign that Colonel Qaddafi, 68, intended to allow the revolts that have taken down the longtime leaders in neighboring Tunisia and Egypt to fell him as well. Colonel Qaddafi for decades has skillfully cultivated tribal rivalries to avoid any threat to his authority.

The whereabouts of Colonel Qaddafi himself remained unclear on Sunday. Over the last three days his security forces have killed at least 173 people, according to a tally by the group Human Rights Watch. Several people in Benghazi hospitals, reached by telephone, said they believed that as many as 200 had been killed and more than 800 wounded there on Saturday alone, with many of the deaths from machine gun fire. And after protesters marched in a funeral procession on Sunday morning, the security forces opened fire again, killing at least 50 more, Human Rights Watch said.

The escalating violence in Libya — a cycle of funerals, confrontations, and more coffins — has made the revolt there the bloodiest in the wave of uprisings sweeping the region.

Under Colonel Qaddafi’s idiosyncratic rule, tribal bonds remain primary even within the ranks of the military, and both protesters and the security forces have reason to believe that backing down will likely mean their ultimate death or imprisonment.

But in a break with the Qaddafi government, the powerful al-Warfalla and al-Zuwayya tribes came out against Colonel Qaddafi on Sunday. “We tell him to leave the country,” a spokesman for the al-Warfalla told the pan-Arab news channel Al Jazeera.

The Libyan government has tried to impose a blackout on the country. Foreign journalists cannot enter. Internet access has been almost totally severed, with only occasional access, though some protesters appear to be using satellite connections or phoning information to services outside the country. Al Jazeera, viewed by many as a cheerleader for the democracy movements stirring the region, has been taken off the air. Several people and intermediaries said Libyans were reluctant to talk to the foreign press via phone, fearing reprisals from the security forces.

Benghazi, the traditional hub of the country’s eastern province, has long been a center of opposition to the Qaddafi government, centered in the Western city of Tripoli. In 1996, Benghazi was the site of a massacre at the Abu Slim prison, when security forces killed about 1,200 prisoners. Those killings have since become a cause for Qaddafi critics there.

Opponents of the government had set Thursday, Feb. 17, as the day of a demonstration dubbed the “day of rage” and inspired by the protests in Tunisia and Egypt. But on Tuesday, the security forces detained a prominent opposition lawyer, Fathi Terbil, who represented many of the families of prisoners killed in the massacre, and members of the families led the protesters into the streets the next day. 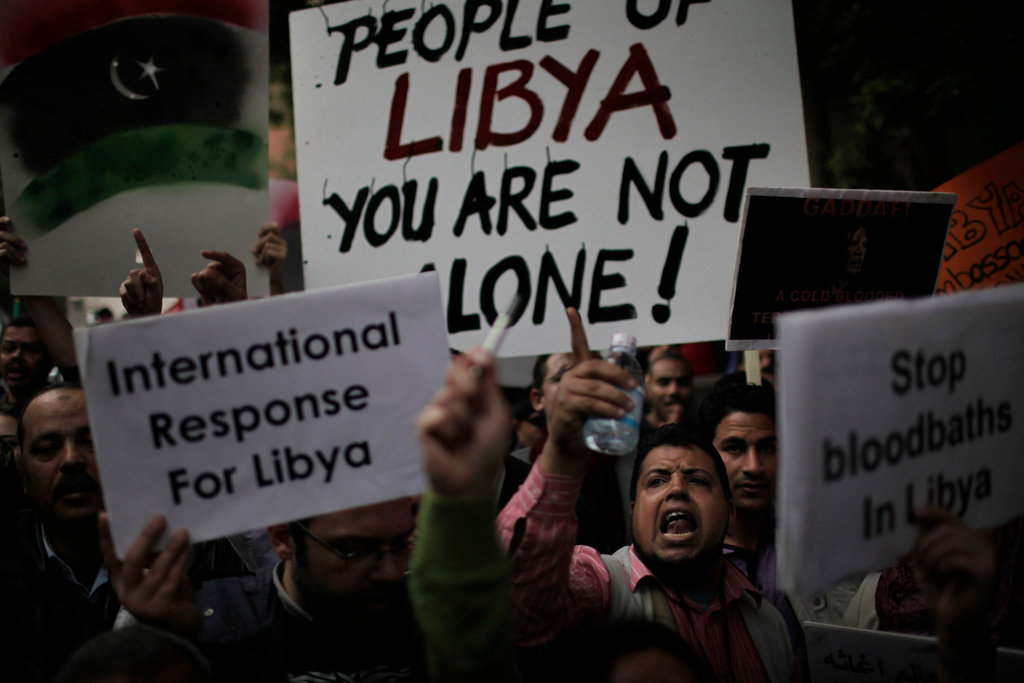 By Sunday, Fathi Terbil had been released and set up a live online video broadcast that appeared to emanate from the roof of the Benghazi courthouse overlooking what residents call their Tahrir Square. “Free Libya Radio,” he called it.

“We are expecting people to die today, more people than before,” Mr. Terbil said early on Sunday, before the latest round of funerals and shootings began.

“If anything happens to us today, we are not going to leave this place,” he said. “I’m not afraid to die, I’m afraid to lose the battle, that’s why I want the media to see what’s going on.”

“At least if we die, so many people can witness, I can protest from everywhere,” he added, “Long live a free Libya. We are determined to fight till the end for our country.”

On Sunday morning, residents of Benghazi described an ongoing battle for control of the city, with a population of about 700,000. Thousands of protesters had occupied a central square in front of the courthouse. As they had for days, they were chanting the slogans that echoed through the streets of Tunis and Cairo before — “The people want to bring down the regime.”

A brigade of more than a thousand other members of the security forces were concentrated a few miles from the courthouse in a barracks in the neighborhood of Berqa. Witnesses said young protesters were attempting suicidal attacks on the barracks with thrown rocks or stun grenades usually used for fishing. But the security forces responded by shooting from the cover of their fortified building, while others shot from vehicles as they cruised the side streets.

By afternoon, however, witnesses reported streams of new protesters flowing to Benghazi from other cities around the east to support the revolt. Then another brigade of reinforcements — described by witnesses as special forces — began collaborating with the protesters as well, some even lending their tanks to the cause of assaulting the government security forces.

Soon the protesters had stormed the local headquarters of the state security services. “These young men are taking bullets in their chests to confront the tyrant,” Mr. Hadi said, speaking by phone from the siege of the security building.

Within hours, several protesters said, they had taken control of the army barracks as well. “Despite the pain and victims, we are happy because the blood of our sons was not spilled in vain,” Amal Mohaity, a lawyer and human rights activist, said as the siege unfolded. “Mark my words: Qaddafi is coming down.”

There were reports of uprisings in several cities along the coast, including in the major cities of Baida and Misratah. Roughly 70 miles east of Benghazi, in the port of Darnah, one witness said that five had died in clashes with the police on Thursday but that by Sunday the protesters had set fire to the security headquarters and the police had fled. “Right now, people are terrified,” said Ashraf Tarbah, a public employee, “and they are praying for the people of Benghazi.”

Fifty prominent Libyan Muslim religious leaders issued an appeal to Muslims in the security forces to stop participating in the violence against protesters.

Over Twitter, Facebook and online social networks, Libyans were calling Sunday for help from across the eastern border in Egypt, pleading for sympathetic Egyptians to bring medical supplies to help with revolt. And Egyptians, with the help of Libyans living abroad, were organizing aid convoys to the border.

The Libyan protesters, however, may face a more daunting prospect than rebels in Egypt to the east or Tunisia to the west.

Colonel Qaddafi has styled his authoritarian government “rule by the masses” and, despite his pervasive security forces, cultivated a noisy disdain for centralized government. With little shared national experience aside from brutal Italian colonialism, Libyans tend to identify themselves as members of tribes or clans rather than citizens of a country, and Colonel Qaddafi has governed in part through the mediation of a “social leadership committee” composed of about 15 representatives of various tribes, said Diederik Vandewalle, a Dartmouth professor who has studied the country.

What’s more, Mr. Vandewalle noted, most of the tribal representatives on the committee are also military officers, who each represent a tribal group within the military. So, unlike the Tunisian or Egyptian militaries, the Libyan military lacks the cohesion or professionalism that might enable it to step in to resolve the conflict with the protesters or to stabilize the country.