Qaddafi’s Grip on the Capital Tightens as Revolt Grows 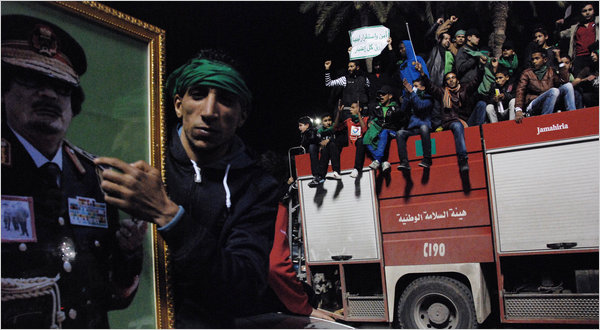 (Republished from the New York Times)

TOBRUK, Libya — Vowing to track down and kill protesters “house by house,” Col. Muammar el-Qaddafi of Libya tightened his grip on the capital, Tripoli, on Tuesday, but the eastern half of the country was slipping beyond his control.

A bloody crackdown drove protesters from the streets of Tripoli, where residents described a state of terror. After a televised speech by Colonel Qaddafi, thousands of his supporters converged in the city’s central Green Square, wearing green bandannas and brandishing large machetes.

Many loaded into trucks headed for the outlying areas of the city, where they occupied traffic intersections and appeared to be massing for neighborhood-to-neighborhood searches.

“It looks like they have been given a green light to kill these people,” one witness said.

Human Rights Watch said it had confirmed 62 deaths in two hospitals after a rampage on Monday night, when witnesses said groups of heavily armed militiamen and mercenaries from other African countries cruised the streets in pickup trucks, spraying crowds with machine-gun fire.

The death toll was probably higher; one witness said militia forces appeared to be using vans to cart away bodies.

But as they clamped down on the capital, Colonel Qaddafi’s security forces did not appear to make any attempt to take back the growing number of towns in the east that had in effect declared their independence and set up informal opposition governments. For now, there is little indication of what will replace the vacuum left by Colonel Qaddafi’s authority in broad parts of the country other than simmering anarchy.

Only around the town of Ajdabiya, south of the revolt’s center in Benghazi, were Colonel Qaddafi’s security forces and militia still clashing with protesters along the road to the colonel’s hometown, Surt.

The widening gap between the capital and the eastern countryside underscored the radically different trajectory of the Libyan revolt from the others that recently toppled Arab autocrats on Libya’s western and eastern borders, in Tunisia and Egypt.

Though the Libyan revolt began with a relatively organized core of longtime government critics in Benghazi, its spread to the capital was swift and spontaneous, outracing any efforts to coordinate the protests.

Colonel Qaddafi has lashed out with a level of violence unseen in either of the other uprisings, partly by importing foreigners without ties to the Libyan people. His four decades of idiosyncratic one-man rule have left the country without any national institutions — not even a unified or disciplined military — that could tame his retribution or provide the framework for a transitional government.

Condemnations of his brutal crackdown mounted, from Secretary of State Hillary Rodham Clinton to the United Nations Security Council to the Arab League, which suspended Libya as a member. High-profile aides and diplomats continued to defect, among them Libya’s interior minister and the country’s ambassadors to the United States, India and Bangladesh.

In his second television appearance in two days, Colonel Qaddafi vowed on Tuesday to die as a martyr for his country. “I will fight on to the last drop of my blood,” he said.

Wearing a beige robe and turban and reading at times from his manifesto, the Green Book, Colonel Qaddafi called the protesters “cockroaches” and attributed the unrest shaking Libya to foreigners, a small group of people distributing pills, brainwashing and young people’s naïve desire to imitate the uprisings in Egypt and Tunisia.

He urged citizens to take to the streets and beat back the protesters, and he described himself in sweeping, megalomaniacal terms. “Muammar Qaddafi is history, resistance, liberty, glory, revolution,” he declared.

In Tobruk, an eastern city that joined the uprising almost as soon as it began, a resident watching the speech in the main square reacted by throwing a rock at Colonel Qaddafi’s face as it was broadcast on a large television. And in a cafe not far from Tobruk, Fawzi Labada, a bus driver, looked incredulously at the screen. “He is weak now,” he said. “He’s a liar, a big liar. He will hang.”

In Tripoli, however, the reaction was more chastened. One resident reported the sound of gunfire during the speech — presumably in celebration, he said, but also in warning. “He is saying, ‘If you go to protest, all the shots will be in your chest,’ ” he said, speaking on the condition of anonymity for fear of reprisals.

“We are unarmed and his warning is very clear,” he added. “The people are terrified now.”

The gap between Colonel Qaddafi’s stronghold in Tripoli and the insurrection in the east recalled Libya’s pre-1931 past as three different countries — Tripolitania, Fezzan and Cyrenaica — and underscored the challenge facing its insurrection.

Many analysts have suggested that Colonel Qaddafi seemed to fear the development of any national institutions or networks that might check his power, and he has kept even his military divided into battalions, each loyal mainly to its own officers.

That has set the stage for heavy defections during the revolt — rebels in the east said some government forces had simply abandoned their uniforms to join the cause. But it also means that Libya’s military is unlikely to play the stabilizing role its Tunisian or Egyptian counterparts did.

Foreign companies and Libyan factions focused intensely on the fate of the country’s substantial oil reserves. The Italian oil company Eni confirmed that it had suspended use of a pipeline from Libya to Sicily that provides 10 percent of Italy’s natural gas.

Opponents of Colonel Qaddafi tightened their control of their area around Ajdabiya, an important site in the oil fields of central Libya, said Tawfiq al-Shahbi, a protest organizer in Tobruk.

Tripoli remained under an information blackout, with no Internet access and limited and intermittent phone service. Colonel Qaddafi’s government has sought to block all foreign journalists from entering the country or reporting on the revolt.

But the uprising in the east cracked open the country on Tuesday as the Libyan military retreated from the eastern border with Egypt and foreign journalists poured through. The road from the border to Tobruk appeared to be completely under the control of Colonel Qaddafi’s opponents, and small, ragtag bands of men in worn fatigues ran easygoing checkpoints and flashed victory signs at visitors.

Except for those guards, there was little to suggest an uprising was under way. Shops were open along the road, which was full of traffic, mostly heading out of Libya.

The government lost control of Tobruk almost immediately, according to Gamal Shallouf, a marine biologist who has become an informal press officer in the city.

Soldiers took off their uniforms on Friday and Saturday, taking the side of protesters, who burned the police station and another government building, smashing a large stone monument of Colonel Qaddafi’s Green Book. Four people were killed during clashes here, residents said.

Salah Algheriani, who works for the state-owned Gulf Oil company, talked about the sea change in Tobruk, where everyone was suddenly full of loud opinions and hope, including the hope that young people might stop leaving the country for Europe.

“The taste of freedom is very delicious,” he said.

The protests began with a relatively organized network of families in Benghazi who had all lost relatives in a 1996 prison riot. Many were represented by the same lawyer, a prominent Qaddafi critic in the region, and his arrest last week set off their uprising.

But the revolt in Tripoli appears far more genuinely spontaneous and unorganized than the Benghazi uprising or, for that matter, the revolutions that toppled the leaders of Tunisia or Egypt. The lack of organization now raises questions about the ability of the mostly young rebels in the capital to regroup after the Qaddafi government’s retaliation.

Protesters in other parts of the country have vowed in recent days to send reinforcements to their fellow citizens in Tripoli, but Qaddafi supporters have set up roadblocks to prevent entry into the city.

Still, even in Tripoli, some protesters who had retreated into their homes vowed that they would return to the street.

“It is too late,” one said. “I don’t think anyone is prepared to listen to Qaddafi anymore, and it is not one town or one area.