Home / Politics / Protests outside the UAE embassy in London for its violations against humanity in several countries, including Libya.

Protests outside the UAE embassy in London for its violations against humanity in several countries, including Libya.

On Wednesday, a number of protesters organized a protest in front of the UAE embassy in the British capital, London. Condemning the UAE’s continuing violations of human rights, reviewing the war crimes it is practicing against civilians in Yemen, Libya and other countries.

The protesters stated, during their stand in conjunction with a celebration by the Emirati embassy on the occasion of the 48th National Day of the State, that human rights violations in the UAE are increasing according to UN reports, pointing out that the UAE is promoting unreal achievements, to cover up this “black record” of violations.

The protesters called for “the Crown Prince of Abu Dhabi, Mohammed bin Zayed, to be tried as directly responsible for committing these violations and crimes,” denouncing the Emirati normalization of relations with the Israeli occupation, considering that it leads to support for Israeli violations against the Palestinians, describing the normalization agreements as a “betrayal” of the Palestinian cause.

It is worth noting that the UAE have supported Haftar in his aggression against Tripoli since April 2019 with the latest types of military weapons, warplanes and mercenaries.

Previous Human Rights Watch calls on Washington not to sell arms to the UAE until it stops interfering in Libya.
Next Maltese court sentenced the Afriqiyah airlines plane hijacker to 25 years imprisonment.

Al-Ghweill: Bashagha is the best person to take over the next government .. What was Hosni Bey comment ?

After his inauguration as President of the United States … Biden lifts the travel restrictions imposed on Islamic countries, including Libya.

43 migrants die and 10 others rescued off the Libyan coast

The Egyptian Foreign Ministry welcomes the agreement on the referendum on the draft constitution and looks forward to hosting the third and final round of the constitutional track. 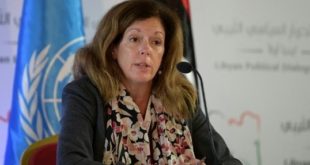 “Williams” warns politicians not to bypass the dialogue forum and considers Al-Sarraj’s decision to establish a “stability support body” as an obstruction to its outcomes.

The UN envoy to Libya, Stephanie Williams, warned on Wednesday, Libyan politicians against trying to …