Home / Politics / Observers: The visit of the Egyptian delegation to Tripoli is an indication of a change in Cairo’s policy and a repositioning towards the American agenda.

Observers: The visit of the Egyptian delegation to Tripoli is an indication of a change in Cairo’s policy and a repositioning towards the American agenda.

The visit of the high-level Egyptian delegation, which included the Undersecretaries of the Ministry of Defense and Foreign Affairs and the Deputy Head of the Intelligence Service, to Tripoli, provoked many positive and cautious reactions.

Observers considered this visit a clear indication of Egypt’s change in policy towards the Libyan crisis, after its direct involvement in supporting Haftar’s rebellion against the legitimate government in April 2019, which ended with his defeat last June.

Journalist Ali Abo Zaid considered that this visit is a clear indication of the change in Egyptian policy towards Libya, adding that “Egypt is looking today to secure its interests in Tripoli after it was confining it to Haftar’s project.”

Abo Zaid indicated, in a statement to Arraed, that Egypt, through this visit, confirms that it supports the political settlement, whose most prominent results will be the unification of institutions, and the visit to Tripoli comes; as an introduction to the success of this endeavor.

The writer Abdul Aziz Al-Ghanay said: The Egyptian positive role is very important in the circumstances of the Libyan situation, and that this visit ended the phase of estrangement, and began the march of political and economic cooperation between the two countries, pointing out that the heroism of the army forces and the defeat of Haftar is the main reason for this visit.

Al-Ghanay added, in a statement to Arraed, that this visit has many positive steps. “I will not be overly optimistic, and I say: Egypt has abandoned Haftar, but I expect a lot from this visit.”

Political analyst Walid irtima believed that what emerged from the Egyptian delegation’s visit carries positive indications after a prolonged period of tension.

Irtema continued, on his Facebook page, that the composition of the delegation and its distribution between a second government level and intelligence makes it a team of an exploratory nature that feels a pulse, and not a delegation for dialogue, and that it came with two goals: the first is to try to reinforce the recent Egyptian trend that began to move to a new location in Libya not far from the American agenda, and the second: is to sense the situation from the ground, and to see the situation in Tripoli, and this is the work of the intelligence, according to his words.

Previous The people of Sirte complain of poor living conditions … and the “management committee” of the city invites them to receive Haftar’s free gift.
Next Çavuşoğlu: Our presence in Libya is legal under the military cooperation agreement.

The Egyptian Foreign Ministry: We will work with the new UN envoy to achieve peace and stability in Libya. 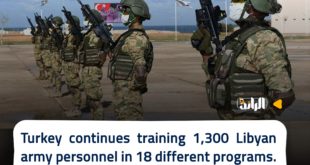 Saima Mohsen is the first Muslim to hold the position of “Attorney General” in the United States of America.

The Presidential Council forms a technical committee to identify the bodies of the mass graves in Tarhuna.