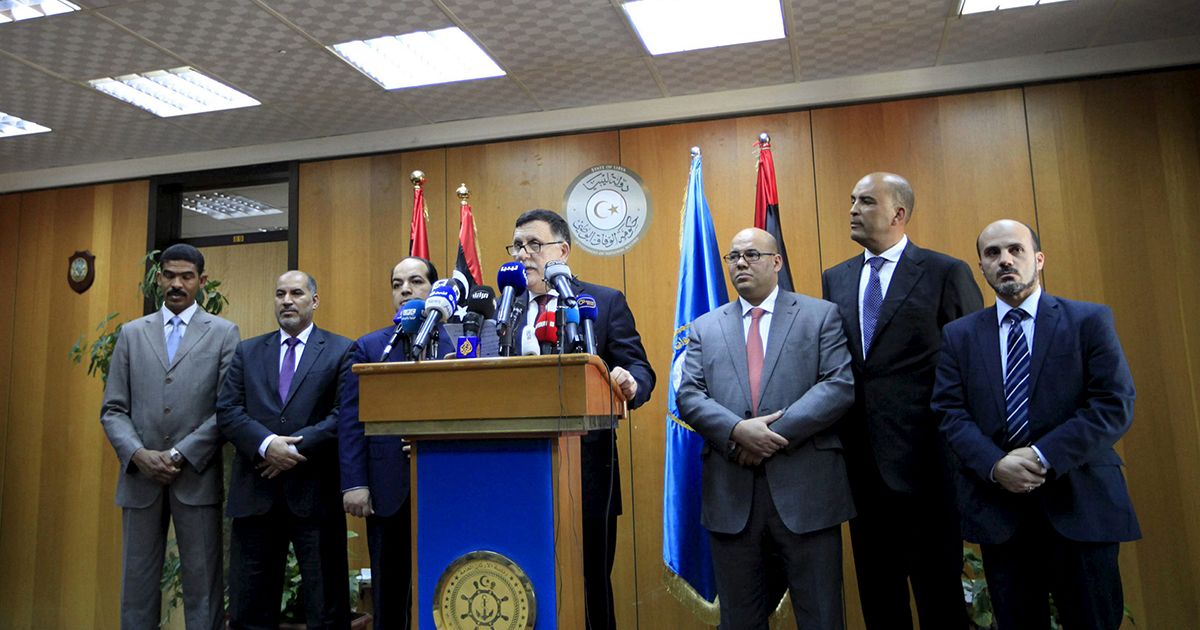 CAIRO — The leaders of Libya’s fragile new unity government cautiously expanded their authority in Tripoli on Friday, venturing from their fortified base in the city port to make public appearances in a downtown mosque and square, while political factions from nearby towns pledged their allegiance.

The unity government, which landed in Tripoli by boat on Wednesday in defiance of warnings and an air blockade imposed by hostile armed groups, is seeking to establish its own authority. Although formed under United Nations auspices in December, and enjoying strong backing from the United States and its European allies, it has faced bitter opposition from rival Libyan factions that, until this week, left it languishing in five-star hotels in neighboring Tunisia.

At lunchtime on Friday, Mr. Serraj, a businessman previously little-known in Libyan politics, ventured a few miles from his base at Tripoli’s naval base to attend prayers at a downtown mosque, and to shake hands with security officials and well-wishers in Martyr’s Square, a central landmark where Col.Muammar el-Qaddafi gave defiant speeches before his ouster in 2011.

Mr. Serraj’s confident thrust appeared to soften the bellicosity of Tripoli’s self-declared government. In a statement on Thursday, the Tripoli leader, Khalifa al-Ghwail, who had earlier issued warnings against Mr. Serraj, pledged to offer “peaceful resistance.”

Still, the situation remained deeply uncertain in a city awash with competing militias, and where alliances can shift easily.

“Things are going better than expected,” said Mattia Toaldo, a senior policy fellow at the European Council on Foreign Relations.

“But the unity government still has to achieve a long checklist of things if it wants to survive, let alone thrive.”

Away from the cameras, negotiations continued to avert confrontation among rival militias. Ibrahim Ben Rijab, a mediator who is leading the talks, said he was cautiously optimistic.

“Steps are being taken,” he said in a phone interview. “But it is still too early to tell. The next two days will be decisive.”

Western countries see the unity government as their best bet for stabilizing Libya and mounting a concerted military drive against Islamic State, which has expanded far beyond its base in Colonel Qaddafi’s hometown, Surt. In recent days they have stepped up efforts to force rival groups to accept the new administration.

On Friday the European Union imposed sanctions on three leaders from the country’s two other parliaments, one in Tripoli and the other in the eastern city of Tobruk. Mr. Ghwail, the prime minister of the unrecognized Tripoli government, was among those named.

The United Nations Security Council, meanwhile, focused on the oil sector in a resolution on Thursday that called the unity government Libya’s sole legitimate authority and condemned efforts by “parallel institutions” to export the country’s oil.

That resolution appeared to have an effect on Friday, when the militia that guards many of the country’s oil terminals pledged loyalty to Mr. Serraj’s government.

Analysts and diplomats say the real test is likely to come in the days ahead, when Mr. Serraj’s ministers are expected to try and establish control of key ministries across Tripoli. Mr. Serraj has already started talks with the Central Bank, which controls foreign reserves estimated at up to $85 billion, and the national oil company, which is the source of the country’s dwindling wealth.

Officials at several ministries, contacted by phone, said there has been deep uncertainty in recent days, with little sense of who is in charge.

Libya’s complex civil conflict, which involves an array of militias organized by town, tribe or ideology, burns with less ferocity than others in the Middle East, such as Yemen or Syria. The United Nations documented 32 civilian casualties across the country during the month of March, mostly in the east. Yet the power vacuum greatly worries the West because it has emboldened the Islamic State in its expansion in Libya and helped increase the flow of migrant boats to Europe.

For Mr. Serraj, much may depend in the days ahead on the stance taken by militias from nearby Misurata, which have controlled much of Tripoli in recent years. But even if his unity government can persuade, or at least neutralize, its opponents, it faces an even greater challenge in eastern Libya.

Gen. Khalifa Hifter, a prominent military leader who controls most of the eastern city of Benghazi, has thus far been ambiguous about the United Nations-led political process. He has not publicly commented on this week’s events.

“Hifter is sitting on the fence, waiting to see if Serraj can control Tripoli,” said Mr. Toaldo, the analyst. “But he will want to show that he’s still a man to be dealt with.”