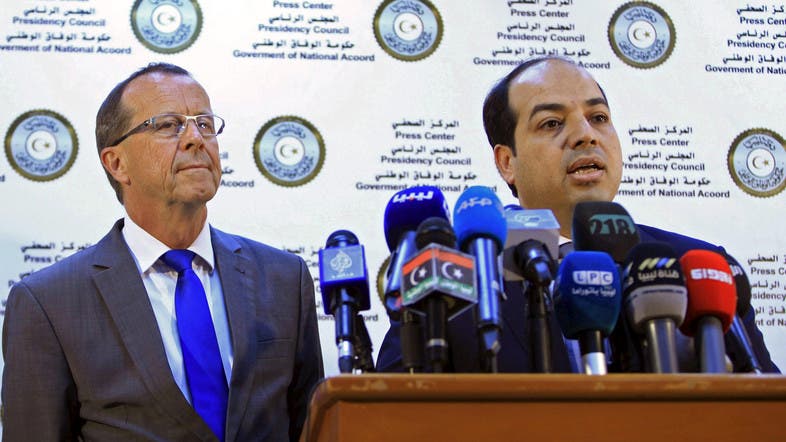 Libya’s new U.N.-backed unity government has secured six ministry buildings in Tripoli and will take administrative control of some of them on Monday, a deputy prime minister has said, despite the volatile security situation.

Libya’s new U.N.-backed unity government has secured six ministry buildings in Tripoli and will take administrative control of some of them on Monday

Western states see the unity government as the best hope for tackling Islamic State in Libya, stemming migration across the Mediterranean, and reviving oil production to rescue Libya’s finances, badly hit by political chaos in the country.

The new government’s leaders arrived in Tripoli late last month by ship after opponents had closed down the capital’s airspace. They have been operating out of the naval base where they docked ever since.

Though the new government has the support of the some of the biggest armed groups present in Tripoli, the security situation is still highly uncertain and there were clashes and heavy gunfire in a western neighborhood overnight on Saturday.

The Government of National Accord emerged from a U.N.-backed deal signed in December, and is aimed at ending the chaos that has seen two sets of rival parliaments and governments operating in Tripoli and the east.

Ahmed Maiteeg, one of the government’s deputy prime ministers, said the GNA would take over work in the ministries of social affairs, youth and sport, and housing on Monday, regardless of whether Libya’s internationally-recognised eastern parliament votes to approve the new government.

Such a vote is required by the U.N.-backed deal. It has been repeatedly delayed, but the parliament is expected to convene on Monday amid intense Western pressure for Libyans to rally round the GNA and allow it to start work.

Maiteeg was speaking at a news conference with U.N. Libya envoy Martin Kobler, who announced that the United Nations would now be basing its operations out of Tripoli rather than Tunis.

“I’m not visiting Tripoli any more, I’m working out of Tripoli,” he said. “The United Nations will be in Tripoli five days a week.”

Most diplomatic staff were evacuated from Tripoli in 2014 amid the heavy fighting that led to the creation of rival governments.

In recent days, senior western officials including the Italian, French and German foreign ministers have returned for the first time.

Western European states have also said they hope to reopen their embassies in the near future.

Kobler said tackling Islamic State, which has taken control of the coastal city of Sirte and has a presence in several other areas of Libya, should be the new government’s most urgent priority.

“This can only be tackled if there is a clear consensus to go ahead with the GNA to be formed and to take over the ministries here in Tripoli,” he said.

0 Points
Upvote Downvote
Previous UN back in Libya as unity government asserts itself ahead of vote
Next Kobler: The HoR has to decide on the Government of National Accord – they have to endorse it!

Amidst internal crises, the government conducts successive foreign visits, What is the purpose?

The US State Department appreciates the role of “Stephanie” in pushing the peace process in Libya.

Learn about the American presidents who faced impeachment.