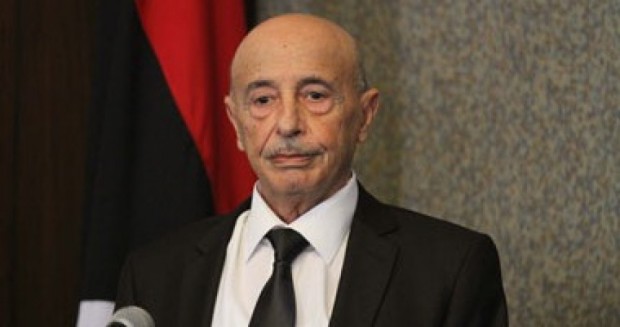 The European Union has imposed sanctions on three prominent Libyan politicians opposed to the installation of a UN-backed government.

The sanctions target the leaders of two rival administrations that have been vying for power amid the chaos after the 2011 overthrow of Muammar Gaddafi.

The measure comes two days after the leaders of a new unity government arrived in the capital, Tripoli.

It is not clear how the new administration, led by the Presidency Council, will be able to take over state institutions there, given the stiff opposition it faces.

Since 2014 Libya has had two competing administrations, one in Tripoli backed by powerful militias and the other about 1,000km (620 miles) away in the eastern port city of Tobruk.

The politicians targeted are:

There has been a growing momentum behind the UN-backed Presidency Council, since they arrived at a navy base in Tripoli on Wednesday.

The EU appears to be playing its final cards to capitalise on that positive drive. It hopes these targeted sanctions will tip the balance in favour of the new government and expedite the process of implementing Libya’s contested political agreement.

In the past 24 hours, residents in Tripoli and other parts of western Libya have been sporadically gathering in public squares in support of the new government. The few militias in the capital who appeared to pose the biggest threat have largely gone silent, for now.

Rival politicians are also softening their tone, though they still maintain their opposition to the new government. But these public scenes have not been repeated in eastern Libya, and the parliament there has still failed to convene to put the proposed unity government to a vote.

The names were published in the EU’s official journal, which said they played a central role in obstructing the establishment of a unity government.

Western powers have recognised the new government as Libya’s sole legitimate administration but it faces opposition in eastern and western Libya.

In December, some rival lawmakers signed up to the United Nations agreement to form a unity administration, but the deal has not yet been backed by all the country’s many militia brigades that formed after the uprising.

The deal saw the formation of a nine-member Presidency Council, which includes the unity Prime Minister Fayez Sarraj who arrived on Wednesday in Tripoli with some of his deputies.

On Thursday, the UN said it will consider lifting sanctions on Libya’s estimated $67bn (£46.8bn) sovereign wealth fund if the government can regain control of the country.

0 Points
Upvote Downvote
Previous Leaders of Libya’s new unity government have arrived in the capital, Tripoli, by boat in an attempt to take control
Next Libya’s U.N.-Backed Government Ventures Farther Into Tripoli