Home / Politics / Libyan lawmakers say majority back unity plan, but no vote yet

Libyan lawmakers say majority back unity plan, but no vote yet 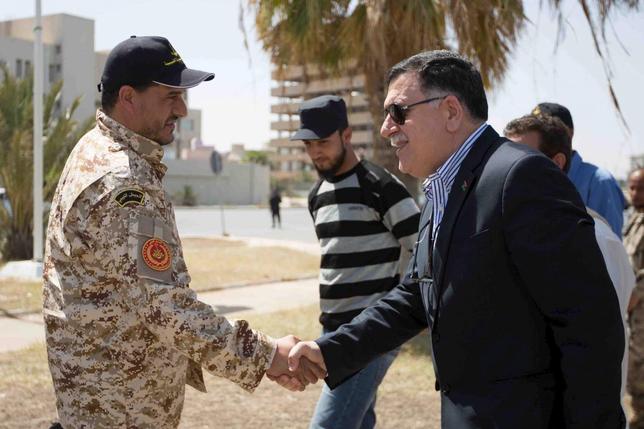 Libya’s internationally recognized parliament, which was forced out of the capital by factional violence, failed to vote for a unity government this week, but a majority of members restated their support and urged it to start work.

The parliament’s approval is a vital part of a U.N.-backed plan to reconcile the administration set up by the recognized parliament in Libya’s far east with an alliance that took over Tripoli in 2014 and declared its own government and assembly.

As Prime Minister Fayez Seraj starts to set up government in a capital still dominated by various armed brigades, the eastern parliament has yet to say it will take part, with uncertainties over future control of the military a major concern.

After the latest push to secure a vote collapsed amid recriminations, a group of pro-GNA lawmakers, who say they number just over 100, a majority, issued a statement backing the unity government late on Thursday.

They urged it to swear an oath in front of the parliament by the end of next week in a location to be determined.

The West sees the Government of National Accord (GNA), formed under a deal agreed in December, as the best chance to end political turmoil since the overthrow of Muammar Gaddafi in 2011 that led to a rise in factional fighting and Islamist militancy, and are urging the eastern parliament to agree.

But politicians close to Libya’s eastern armed forces and its powerful commander, Khalifa Haftar, have blocked a vote, saying they want to protect the military’s future role.

Haftar’s forces have made significant gains in the eastern city of Benghazi, where they launched a campaign against Islamist groups and other opponents two years ago.

In their statement, the pro-GNA members of the eastern House of Representatives renewed a call to amend the U.N.-mediated deal, cancelling a clause that would transfer military appointments to the new administration.

U.N. envoy Martin Kobler, who was in the east earlier this week to lobby members of parliament, expressed his “profound disappointment” at the failure to vote, saying in a statement:

“I find it regrettable that yet again a clear majority of members of the House of Representatives are denied the opportunity to exercise their intrinsic democratic right as elected representatives of the Libyan people.”

Jwaili: We hope the House of Representatives will meet at the earliest opportunity to give confidence to the government.

“Al-Tabakli” confirms that a session of the representatives will be held in Tripoli in the presence of Aqila’s deputies and “Araid” excludes holding the session in Sirte.

Kubiš: political dialogue forum has a decisive and legitimate role in resolving the deadlock and division, and we call for rapid agreement on the constitutional basis necessary for holding elections.

The head of the United Nations Support Mission in Libya, Jan Kubis, stressed on Monday …