The Italian Defense Minister, Lorenzo Guerrini, stressed the strategic role of Libya with regard to Italy.

Guerini said, Thursday, that not being fully present in the Libyan issue is a mistake for both Italy and the European Union, according to the Italian “Nova” agency.

It is worth noting that the Italian Foreign Minister Luigi De Maio discussed in Tripoli on Wednesday, during his meeting with the President of the Presidency Council, Fayez Al-Sarraj, the activation of the joint economic committee between the two countries.

Previous The UN mission in Libya congratulates the people of Misurata on the success of the electoral process.
Next Akar: We will continue to support the GNA , and we will open the UAE files at the appropriate time.

The Italian press: Closing the oil ports again in the east aims to thwart the political dialogue by Haftar

Kidnapping, murder and extortion of Egyptian workers … a security vacuum in the areas controlled by Haftar’s militias. 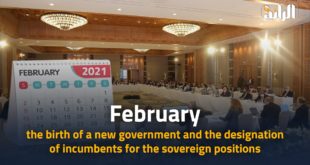 Observers: Bo_Zniqa’s results may end the state of division in the sovereign institutions

Moussa Faraj: The Central Bank is based in Tripoli and cannot be transferred anywhere else.