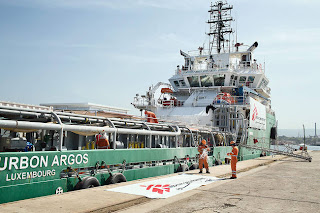 A European rescue boat was attacked by an unknown armed group on the Mediterranean Sea off Libya’s shores.

On the morning of August 17, the armed group was on a speedboat when they fired at Bourbon Argos, a rescue boat used by Médecins Sans Frontières (MSF). The MSF crew was able to make it into a secured room on the boat before the armed group made it on board. The armed men were on the ship for nearly an hour before realizing they would not be able to get to the MFS crew in the secured room. The armed men left and oddly did not take anything with them.

The reason the armed group attacked the ship remains unclear, however, Stefano Argenziano, the MSF mission operations coordinator, believes the group was there to kill.

“They were not warning shots. There were a number of bullets shot at us from a distance – with an intention, we believe, to harm and potentially kill. We received at least 13 bullets, hitting different parts of the bridge. People who were on the bridge, the command-and-control part of the ship, could have been killed or seriously harmed, ” said Argenziano.

The MSF released a statement saying, “MSF believes that the intruders aimed to physically harm the Bourbon Argos’s staff but thanks to the sound security procedures enacted, all team members were safe. Nothing was taken during the incident and the damage to the ship was only minimal.”

The statement also said that, “MSF strongly condemns this shameful act towards a humanitarian organisation rescuing and delivering lifesaving medical care to those crossing the central Mediterranean Sea.”

In the last two years, over 25,000 refugees have been rescued by MSF on the Mediterranean and MSF now has three ships on duty near Libya’s coastline.

So far this year, over 100,000 refugees were able to cross the Mediterranean and make it to Italy.

Many of the refugees fleeing to Europe are trying to escape poverty, oppression and war in Nigeria, Eritrea and Gambia.

Other rescue missions on the Mediterranean are organized by European navies, and other humanitarian groups, such as Save the Children and the Migrant Offshore Aid Station (MOAS).

MSF and MOAS both verified on Thursday that they will continue to operate on the Mediterranean as they evaluate the security risk that has risen as a result of the attack. Both groups do have security measures in place but last week’s attack is said to have never happened before.

MSF continues to evaluate the attack in attempts to uncover who the armed group was. Those reviewing the situation admit that it will be difficult to figure out exactly who was behind the attack given Libya’s chaotic situation.

Argenziano said the armed group “were professionals, they were not just random fishermen. They were trained in military tactics and [in the] use of weapons,” suggesting that they were from a well organized Libyan fraction.

There are countless militia groups who operate along Libya’s coastline making it nearly impossible to identify the group who attacked the MSF ship.

Anas El Gomati, the director to a Libyan thinktank, said the attack was most likely not by ISIS. “You can never rule out Isis, but it doesn’t have the signature PR [follow-up] that Isis goes for when they do these kinds of operations,” said El Gomati. “It also seems beyond Isis’s current capacities, given they are wedged into a war in central Libya.”

MSF will take two weeks to evaluate the attack before making any changes or adding more security measures said Argenziano. Argenziano also emphasized his organization’s commitment to continuing their lifesaving missions. “It is important to stress that we are an organisation specialised in working in emergencies and highly insecure contexts,” he added.

Argenziano said MSF will not be operating with protection from European navies which are also conducting their own operations in the Mediterranean, saying that MSF has a history of being independent of states. He explained that unlike MSF and other humanitarian missions, naval operations on the Mediterranean are focused on halting the migration of refugees.

“Is the deterrent bringing any of the intended results?” Argenziano questioned. “People keep on dying in large numbers, while the [arrival] numbers are not going down.”