Forces loyal to the Libyan unity Government (GNA) cornered ISIS fighters in their few remaining hideouts in Sirte on Monday.

Dozens of soldiers from the Libyan forces were killed and wounded in the clashes on Monday according to Libyan forces who trapped ISIS in a two square kilometers area in Sirte’s centre.

Misrata hospital reported that 38 Libyan soldiers were killed and 185 were wounded during Sunday’s clashes.

So far no information about how many ISIS fighters were killed and injured is available.

The hospital in Misrata has been struggling to cope with the number of casualties coming from the frontlines. On Sunday, the hospital had to use its main reception as an emergency room in order to look after the injured soldiers.

Doctor Akram Jumaa described the aftermath of the battle as “blood day”.

“I carried out dozens of surgeries that lasted until this morning, and some others are still ongoing,” said Dr. Jumaa.

“It’s a really bad feeling not to have the means” to give proper healthcare to each patient, said Mohammad Quweid, one of the nurses at Misrata’s hospital.

“There aren’t enough rooms so sometimes we have to put five or six fighters together in the same room,” Quweid adds.

The fighting on Sunday lasted overnight, however, in the early morning on Monday there was an eerie silence.

“Our forces are preparing to launch a new assault on the area where Daesh [ISIS] is encircled,” said Reda Issa, a spokesperson for the Libyan forces.

The Qurtuba Mosque in district Number Three, which the extremist group had named after the Al-Qaeda leader Abu Musab Al-Zarqawi, is now under the control of Libyan forces, said the GNA’s media office.

According to medical sources, over 400 fighters loyal to the GNA have been killed and close to 2,500 wounded since the beginning of the offensive launched against ISIS in May.

On August 24, the US airstrike campaign, which has allowed Libyan forces to make significant advances against ISIS, had launched over 80 airstrikes, according to the US military.

In the scenario of the Russian spread in Libya … the Alsharara is under the control of the “Wagner” group , what is the GNA role now? 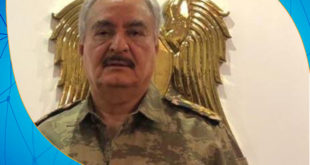 An American consulting firm terminates its contract with Haftar after his consecutive defeats.

The American Embassy in Libya: Russian “Wagner” Mercenaries attack on the Alsharara field, is an attack on the sovereignty of Libya.

Bashagha discusses with the American government delegation the dismantling of armed militias all over the country.