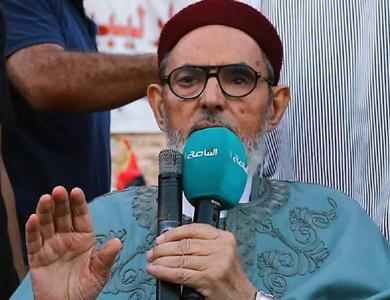 The former Grand Mufti of Libya, Sadeq Al-Ghiryani, claimed on Wednesday that “war on God” would be declared if the Libyan Government sought the support of the state bank.

Al-Ghiryani made his statement on a local TV show, Islam and Life, on Wednesday evening.

“It is impossible for governments proclaimed by the West to bring us (the Libyan people) a good deal,” added Al-Ghiryani.

Last July Al-Ghiryani called on “revolutionaries”, especially those from the Tripoli district known as Soug Al-Jumaa, to end their protection of the Presidential Council and the Libyan Government.

Al-Ghiryani also called on “everyone who supported the establishment of the guardianship government” to take this matter seriously. In his television address to the Libyan people, Al-Ghiryani said that the Libyan Government and the West are allies of Khalifa Haftar and his forces.

Moreover, Al-Ghiryani added that Haftar and his alleged allies, the Libyan Government and Western forces, are killing the people of Benghazi “and are labeling the revolutionaries who are defending Benghazi and Derna as terrorists.”

The DBB are an armed force made up of soldiers and civilians turned freedom fighters from Benghazi and Ajdabiya. The DBB forces fought with the same commanders in the battles against former dictator Muammar Gaddafi in 2011 that they are fighting with today. Some of these commanders are Colonel Mustafa Al-Sharcassy, Ismail Al-Salaby, Ziad Bal’am, Ahmad Al-Tajouri, and Saadi Al-Nawafly.