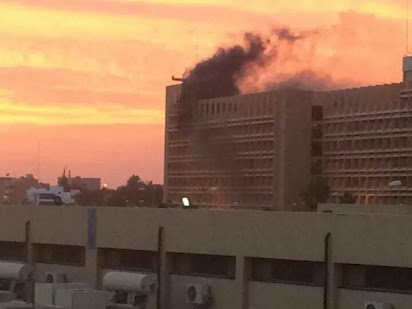 Benghazi Medical Centre was attacked on Thursday after two explosions were set off causing significant damage to the building, said the hospital’s media office.

The hospital released a statement condemning the attack, who they blamed on “terrorists.”

“This is not the first time the centre comes under such attack,” they said, adding that all patients were accounted for, however, four individuals sustained injuries from the explosion.

Security measures for the medical centre and the surrounding area have been heightened and the hospital’s administration have enforced a lockdown to keep all visitors from entering the building except medical staff.

According to local news, the Benghazi Medical Centre is where soldiers injured from the battles taking place in Ganfouda were being treated. The attackers used a suitcase to transport the explosives to the fifth floor bathroom.

The battle in Ganfouda is being fought on one side by renegade General Khalifa Haftar’s forces, known as the Libyan National Army (LNA), who have forcefully imposed their illegitimate authority over civilians in eastern Libya. On the other side, are local brigades, known as the Benghazi Revolutionaries Shura Council (BRSC), who oppose Haftar’s control of eastern Libya.

Fighting between the two sides is concentrated in the Ganfouda district in Benghazi where the BRSC originate from. Ganfouda and a few other areas in Benghazi have been put under siege by the LNA for opposing Haftar.

The LNA’s ruthless blockade of the area has put the safety of many families in Benghazi at risk since Hafter began his siege on Ganfouda in July 2014.

Human Rights Watch (HRW) released a statement last month regarding the civilians who are trapped by violence in Benghazi.

“All sides to the conflict in Benghazi should allow all civilians to leave the Ganfouda neighbourhood, and allow for the safe passage of humanitarian aid into the neighbourhood,” said the HRW statement

Amidst internal crises, the government conducts successive foreign visits, What is the purpose?

The US State Department appreciates the role of “Stephanie” in pushing the peace process in Libya.

Learn about the American presidents who faced impeachment.