Home / Politics / Al-Marimi: HOR discussed Tawergha file, and the session does not need a quorum

Al-Marimi: HOR discussed Tawergha file, and the session does not need a quorum

The Speaker of the House of Representatives (HOR) media advisor, Fathi Al-Marimi said on Monday the session of the HOR held today is previously suspended one and therefore does not need a quorum.

Al-Marimi told ArraedLg, the session, chaired by First Vice-President Fawzi Al-Nuwairi, discussed the issue of the displaced residents of Tawergha and the events in the South, adding that the discussion included the possibility of holding a session in the south or west regions.

The House of Representatives did not include the political agreement, signed in Skhirat, in the constitutional declaration, in addition to not passing a

Previous 97 migrants rescued off Farwa Island
Next United States: Our goal is a comprehensive and influential government in Libya

Bashagha renews his support for establishing the Supreme Security Chamber in cooperation with “Rose” the British company.

Observers: The attempts to remove “Williams” are intended to thwart the political dialogue.

Al-Yaqoubi: We support the continuation of “Williams” until the end of the political dialogue.

Egypt Air resumes its flights to Qatar after a 3-year halt. 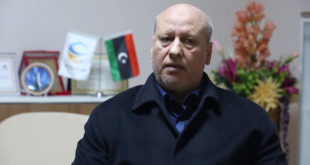 Sawan surprised at trying to welcome a new envoy instead of “Williams”.

The head of the Justice and Construction Party, Mohamed Sawan, on Monday considered the attempt …