Home / Politics / Akar: Turkey is a partner in the F-35 manufacturing, not a client.

Akar: Turkey is a partner in the F-35 manufacturing, not a client.

Turkish Minister of Defense, Khulusi Akar, said that Ankara is a partner in the program of manufacturing F-35 fighters, and is not just a customer for it, and that his country has attached great importance to the design, development and production of Turkish defenses in recent years.

Akar, according to the Turkish Anatolia Agency Tuesday, expressed Turkey’s desire to continue constructive and mutual cooperation with the United States in the field of defense industries, believing that if Turkey has the opportunity to make greater contributions that makes it a more developed partner of the United States, the areas of cooperation between the two countries will increase in the future.

“Akar” added that his country is not just a country seeking to buy F-35 fighters, but an important partner in their production, and that the security technology of the fighters ’is equally important to Turkey, as it is important to the United States, stressing their willingness to discuss with Washington about its doubts about the compatibility of F-35 fighters with the system. S-400 “Russian” missiles.

Akar indicated that the fate of the region is related to Turkey, and the United States should realize this and give priority to treating it as a regional partner that would contribute to solving global crises, explaining that the United States preferred to pursue democratic means towards the terrorist organization “Gulen” who is considered an enemy of democracy, calling on the American authorities to take concrete steps towards the terrorist leader, Fathallah Gulen, and hand him over to Ankara.

It is worth noting that Turkish companies are working until the end of 2022 to produce 139 parts of the F-35 fighters.

Previous National Oil Corporation reveals the control of mercenaries over oil fields and ports, and warns of repercussions.
Next Ministry of Justice: We are working on a draft law criminalizing hatred speech.

Al-Mishri: There is no agreement on Aqeela to take over the presidency of the Presidential Council, and Maiteeq’s agreement came to save Haftar. 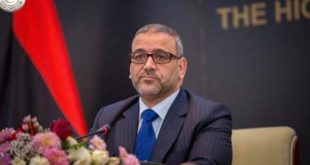 Al-Mishri: There is a deliberate obstruction of dialogue tracks by the beneficiaries of the current situation.

Debrez: The solution in Libya will not be military, and its categorical solution is in the constitution.

Al-Ra’id: The solution to the Libyan crisis can only be through a negotiated track.

On Monday, a member of Parliament, Muhammad Al-Ra’id, said that the solution to the Libyan …