Home / Politics / 70 Percent of Sirte is Free from ISIS

70 Percent of Sirte is Free from ISIS 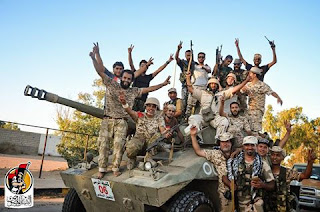 In the last 24 hours, Libyan forces fighting ISIS in Sirte have liberated most of the city with the help of US airstrikes which have enabled the Libyan forces to take over strategic areas in the city centre.

Mokhtar Khalifa, the mayor of Sirte, said to The Associated Press that the southern and western areas of the city are now in the control of the forces loyal to the UN-backed unity government (GNA).

“Sirte is 70 percent free, it will soon be completely free,” Khalifa said.

The GNA’s advance against the extremist group slowed down after ISIS began to use suicide bombs, sniper fire, and landmines in retaliation. Since August 1st, when the US air strikes began, GNA forces have been able to liberate areas of Sirte that they have been trying to secure for sometime now.

Khalifa admitted that “the international support has made a big difference” to the Libyan army’s fight against ISIS.